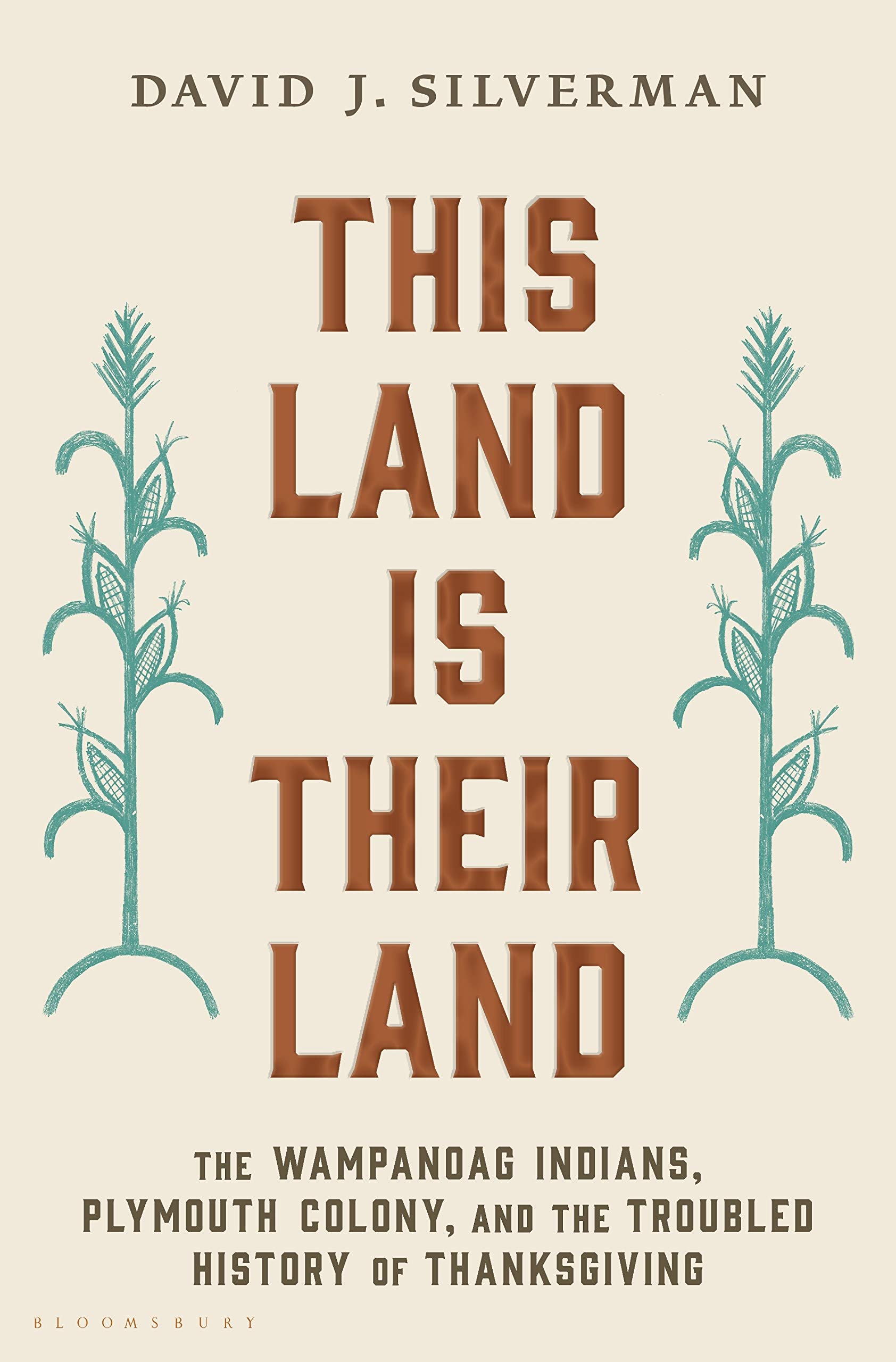 “We do ourselves no good by hiding from the truth,” a Wampanoag elder told David Silverman as he prepared This Land is Their Land. In upward of 400 pages, Silverman suggests that, by “we” the elder was referring to those who would prefer to cling to heartwarming narratives of turkey and peace, rather than grapple with the details of the historical record, and the devastation the “first thanksgiving” left in its wake.

Silverman’s previous academic works, including Red Bretheren (2010), Faith and Boundaries (2007), and Thundersticks (2016), are at the intersection of Native political and religious history. This Land Is Their Land examines the well-known story of the “first Thanksgiving,” yes, the one where the peaceful Natives and generous Pilgrims put aside their differences if only briefly, to sit down to a spread of turkey, cranberry sauce, and pumpkin pie à la J.LG Ferris’s 1930 painting. Silverman refers to this narrative as the “myth of Thanksgiving,” a myth that is both one dimensional and shortsighted.

In order to challenge this myth, Silverman takes seriously calls of Native scholars and leaders to recognize Native tellings of events. This manifests in an extended chronology of the First Thanksgiving event in two directions, before and after 1621. This structure allows Silverman to address the often false, unspoken assumptions about the Thanksgiving origin story. The first of these was the assumption that “this land” (the land Plymouth colony claimed for itself) was in fact “their” (Wampanoag) land, and was neither unoccupied nor uncultivated. Silverman begins by addressing longstanding interactions between Europeans (English, French, and Dutch) and tribes of  Wampanoag, Massachusett, Narragansett, and other peoples. He describes the changes Europeans brought to Native land, and the ways Native peoples attempted to circumvent European intentions. By the time the Pilgrims arrived in 1620, the Wampanoag people and their land had been devastated by disease, which caused long-lasting pain in their communities. Aware of the English presence, Wampanoags occupying land on Cape Cod watched the Pilgrims for months before approaching them. This did not stop the colonists from entering Wampanoag land, desecrating gravesites, and claiming the land at Plymouth as their own. 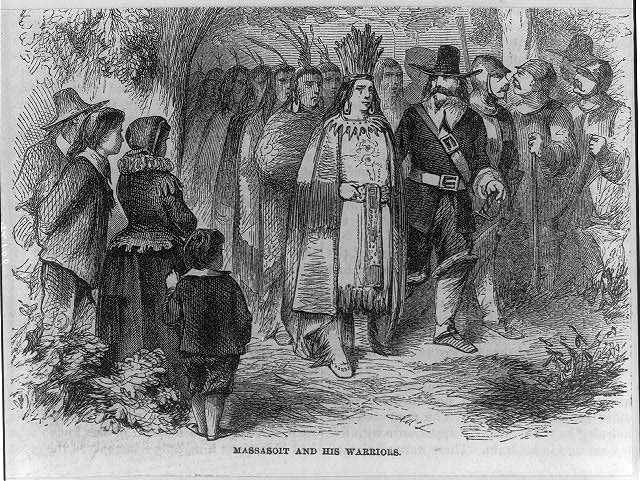 The wood engraving shows Massasoit and warriors marching into the night. One of several illustrations showing early settlers of New England (via Library of Congress)

As the historical record suggests, the meeting that occurred on the “First Thanksgiving,” while significant, was neither as significant as popular culture remembers it, nor as definitive as the narrative implies. Preceded by decades of interactions with Europeans, particularly the English, Sachems like Ousamequin (or Massasoit) weighed their options and thought carefully about what peace, if only temporary, would mean with the settlers. The decision to sit down with the Plymouth settlers was the result of a series of intense intratribal negotiations, politics, and cultural practices. And, they both needed allies.

The Thanksgiving holiday as we know it only emerged when Abraham Lincoln declared a day of “Thanksgiving and Praise” in 1863 and became an official holiday in 1870. However, the association between the Thanksgiving holiday and that particular harvest meeting in 1621 where Pilgrims and Wampanoag diplomats and representatives met to share a meal after decades of tension, did not emerge until the twentieth century.

While I won’t elaborate here the dozens of differences between the historical record and the typical Thanksgiving Story, I will recommend This Land is Their Land as important introductory reading. The text is approachable, succinct, and historically grounded. What this book does well is bring the origins of Thanksgiving back into the public spotlight. However, Silverman is transparent in the work’s shortcoming, stating, “this book operates under the premise that imperfect histories of Indian life are better than no histories” (18).

I, like Silverman, would encourage readers to read similar histories written by Native scholars specializing in this history. Scholars of Native studies, led by Indigenous scholars, continue to generate a rich historiography addressing the “problems” Silverman identifies. I would recommend Lisa Brooks’ Our Beloved Kin, and Jean O’Brien and Lisa Blee’s Monumental Mobility, to name a few. 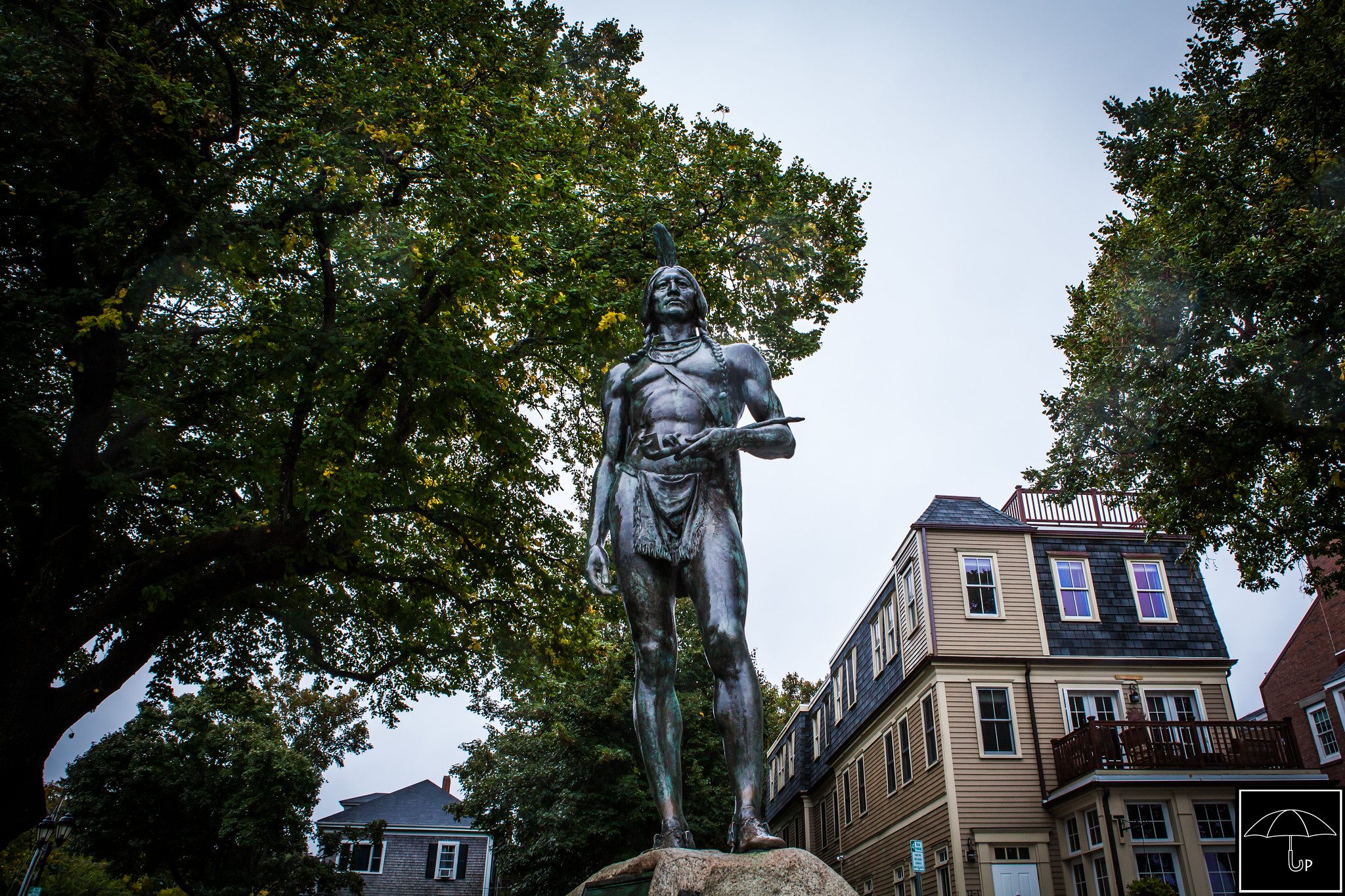 Statue of Massasoit in Plymouth. Photo by Jesse Hodge(via Flickr)

As the 400th anniversary of the meeting between the Pilgrims and Ousamequin approaches, it would be prudent to reflect on the legacy of the holiday and the important work generated in the field of Native studies. The national holiday to celebrate thankfulness for many Americans serves as a reminder for Native peoples (also Americans) of generations of historical trauma caused by settlers in their homelands and continued efforts to displace them. Thanksgiving is a reminder of colonization, disease, and the numerous treaties broken and still unresolved by the United States. One solution might be to reorient ourselves and, rather than viewing history from the perspective of the Pilgrims, tell the story of Thanksgiving by “grounding ourselves in Indian territory and watching the Mayflower and its inhabitants arrive on their shores” (Richter) and continuously encroach on Wampanoag lands.

Another solution might be following the lead of Native scholars and activists who simply call for “land back.”

You might also like:
Native Literatures and Indigenous Peoples’ Day: A Brief Historiography
Cynthia Attaquin and a Wampanoag Network of Petitioners